Here in the ‘Topes front office there’s a lot of action going on as our 10th season rapidly approaches. From the Pro Shop to the fields of Belen Little League, everyone has their glove-hands full (see what I did there?). Let’s check in with some of the big happenings over the next month: 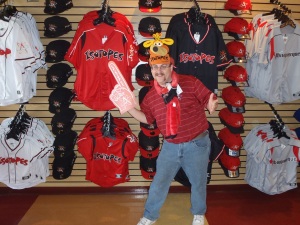 And also in the office, we’re all dialed in for some NCAA March Madness, which means ’round the clock “expert” talk about basketball.

Even when you haven’t been watching any of the season.

So as the water cooler becomes the most crowded place in the office and the big wigs lock their doors because of a sudden “important meeting” (everyone knows you’re watching the games in there), please make sure to avoid the following mishaps for the madness that is the NCAA Tourney:

1. The “No That’s Not Going To Happen” Card: Don’t be THAT guy that reads over other people’s bracket and quickly points out that “No! That pick will never happen!” I don’t care how many hours of “Bracketology” you watched, you’re not the Schwab for a reason.

2. Bringing Up Others’ Brackets Just To Talk About Your Own: It’s the same rules as Fantasy Football; everyone wants to talk about their team, but no one cares, AT ALL, about anyone else’s team. Please don’t come strike up a thrilling conversation to hear the winner of my bracket when you have a 15-minute speech-of-the-century planned about that INTENSE 8/9 matchup.

3. Not Paying An Entrance Fee: I’m not condoning gambling, but if, by some far-shot chance, you’re involved in some exchange of money, goods or services for an NCAA pool, please, please, please pay the entrance fee ON TIME. Everyone knows that one person who keeps “forgetting” to ante up just in time for their bracket champion to lose in the third round. This, of course, is followed by “Well, I’m not paying now,” and 365 days to remember why you’ll never let that person join the brackets again.

4. Claiming You Knew That Upset Was Coming, And Not Putting It In Your Bracket: The list is long and frustrating; all those no-names that conveniently remind you of your bracket being destroyed. And then there are the teams that actually destroy your brackets. If you think Long Beach State is going to tear through the first few rounds and show up in the Final Four, then by-goodness, PUT IT in your brackets. I’ll entertain your “I knew Butler would win” rant as long as you have it in ink. If not, the next upset will be coming from you as you’re not allowed to watch the games with the rest of the group.

6. Putting All 1-Seeds In The Final Four: This is self explanatory. Sure, they’re one seeds for a reason. And sure, they have the easiest path to the championship. But no, you aren’t allowed to pick all four in the Final Four. I’ll give you two teams…heck, I’ll  even give you three of the one seeds because I’m in a good mood from wearing jeans to the office today, but not all four. This just ruins any madness from this tournament when you pick the “best” teams to beat everyone else. I vote you let your hair down, live a little, and put that double-digit seed in the Final Four. Plus, you’ll have legitimate bragging rights about it (see number 4).

7. Informing Everyone That Your School Will Win It All: I’m sure your die-hard dedication to the alma mater will propel the team to an amazing run, blowing out every opponent along the way. My own Norfolk State is playing the two seed Missouri? Laughable. Just don’t. We all know you have insider news into your school you once went to for a few years and might have said “hi” to the basketball coach once while you were there, but don’t try to convince other people a 14 seed with an 18-16 record is a sure bet to win it all.

8. Pretending Not To Care: This is by far the worst move in the history of NCAA March Madness. No matter how little you know about basketball, or even sports in general, you DO care about this thing. Don’t be the killjoy that is “above” buzzer beaters and upsets. I’m not saying you’ll lose friends for pretending not to care, but you might find your weekend schedule quickly opening up.

All that being said, opening day can’t come soon enough. With great happenings around the office and a little Madness on the side, we’re finding ways to keep ourselves entertained until the first crack of the bat.

Just don’t let it come from me when someone violates a March Madness mishap.