It wouldn’t be a proper release of something special without early morning campers and winding lines of eager fans.

Oh, and sub-freezing temperatures too.

Bundled in everything from boots to beanies, Isotopes fans lined the front of the box office, counting down the seconds until 10 AM and the release of individual game tickets — Counting seconds because it’s impossible to think minutes when you’re being pelted by snow.

But even that wasn’t enough to drive people away from laying hands on this year’s freshly printed passes.

Dave Christenson, who staked out the very first spot in line, arrived to Isotopes Park early this morning to purchase his perfect seats for the upcoming season.

“We’ve been out here since six this morning,” Christenson said. “We were sitting in the cold, shivering and drinking coffee, just trying to stay warm.”

Which is no easy feat in this inconsistent “Spring Training” weather.

For fans, the pre-ticket wait has taken on the persona of baseball at Isotopes Park, where the atmosphere is fan friendly and you can’t help but enjoy yourself.

“It’s really fun because you see the same people every year,” said Cathy Eagan, whose been coming to ticket sale day for the previous five years. “It really doesn’t matter which game I’m going to — it’s baseball, it’s great.”

Likewise, Christenson and company have made the best of the chilly mornings, finding ways to pass the time until the box office windows finally open up.

“We just want to come out here and hang out and have a good time,” Christenson said. “We’re already talking about doing it again next year.”

Christenson can expect to see some familiar faces if he braves the cold again for the 2013 season. Long-time opening-ticket veteran Tom Kieffer has been purchasing tickets during release day since he moved to Albuquerque. Besides bundling up Saturday morning, Kieffer also wore the expectation of recognizing a few fans while he waits to claim his tickets.

“I usually run into a few friends who’re just as into this whole thing as me,” Kieffer said. “But honestly I’m just ready to go, ready for the first game.”

Excitement for opening day seemed to be a common theme throughout ‘Topes fans, some looking forward to post-game fireworks and others just wanting the gates unlocked for opening night.

“I love coming to this ballpark,” Christenson said. “It’s such an awesome venue; it’s a lot more fun than any other park I’ve been to.”

And if you were not one of the fans bold enough (subbing in “crazy” is also acceptable) to triumph over the elements on Saturday, fans like Christenson, Eagan or Kieffer still happily invite you to come join them at Isotopes Park for a game or two this season.

“People need to come out here to watch the games and support the team,” Kieffer said. “Hopefully we win it all one year!”

And if that happens, 6 AM might not be early enough for tickets. 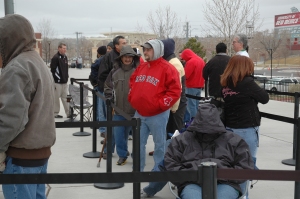