Thrown into the mix of three new free-agent infielder signings this offseason (Mark Ellis, Jerry Hairston and Adam Kennedy), Sellers needs to continue to make the most of his opportunities to stand out from the pack.

And it certainly doesn’t help that his three competitors have appeared in over 1,000 Major League games each, compared to Sellers’ 36.

“Kennedy, Ellis, those guys are vets and I can’t control it,” Sellers told MLB.com. “I just have to play as hard as I can to help this team.”

Which Sellers is consistently doing this spring, ranking seventh in overall batting average — In the entire National League.

Through seven games with the Dodges in Spring Training, Sellers has ripped a base hit in five of his 13 at-bats, posting a solid .385 batting average. The utility fielder also lifted a three-run home run in a pinch-hit situation Monday against the Angels.

Unfortunately, power hitting isn’t exactly what the Dodgers are looking for from Sellers, as Manager Don Mattingly expects a more balanced approach at the plate.

“When he got back to the dugout, the first thing I told him was to hit the ball to right field next at-bat,” Mattingly said, referencing hitting line drives. “He knows he has to. He led the team in fly-ball percentage last year. I don’t want to see him trying to hit home runs… He has to keep working on his swing to keep the ball down.”

Try telling that to Sellers, who’s belted 14 home runs in each of his last two seasons with the Isotopes.

Even with his strong start, most still consider Sellers a long-shot to make the opening-day roster, largely due to the long list of Dodgers veteran infielders. This leaves a single reserve spot to come down to a friendly battle with fellow Isotopes teammate, Jerry Sands. Both have drawn attention in the first half of Spring Training, but Mattingly seems to be leaning towards keeping Sellers while sending Sands back to Albuquerque.

“We all like Jerry (Sands), but he’s at a point where he can still get better,” Mattingly said. “He has hit lefties pretty well, but struggled on the other side with the righties. I think he can do that, but still remains to be seen.”

Despite such news, Sellers knows he must continue to adapt his game (specifically avoiding fly outs) if he wants to become an everyday player in the big leagues. This also comes on the back of the Dodgers bringing in three players, who, in their attempt to earn a starting role, will try to keep Sellers in Albuquerque.

“It’s frustrating a little bit,” Sellers said. “But it made me work harder and gave me a little fire to come out and work my butt off.”

And also keep the ball down in the process. 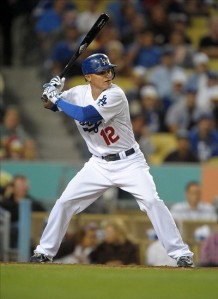